Unlike many other blockchain solutions, Dragonchain is a hybrid platform. Through Dragon Net, each chain combines the power of a public blockchain (like Ethereum) with the privacy of a private blockchain (like Hyperledger).

Dragonchain organizes its network into five separate levels. An L1, or business node, is a totally private blockchain only accessible through use of public/private keypairs. All business logic, including smart contracts, can be executed on this node directly and added to the chain.

After creating a block, the L1 broadcasts a sanitized version stripped of sensitive private data to Dragon Net. Validating nodes between L2 and L5 ensure that the L1 has not been compromised or tampered with, and finally a hash of many L1 blocks are ledgered onto a public blockchain (Ethereum, Bitcoin, Binance Chain) to take advantage of the hash power of massive public networks and pin the state of an L1.

Dragon Net can be thought of as a “blockchain of blockchains”, where every level is a complete private blockchain. Because an L1 can send to multiple nodes on a single level, proof of existence is distributed among many places in the network. Eventually, proof of existence reaches level 5 and is published on a public network. 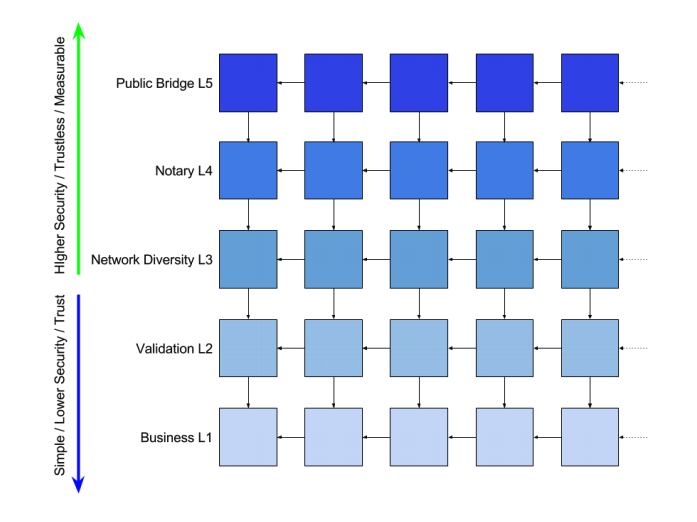 The "blockchain of blockchains" architecture described above

To learn more about the general architecture, read the Dragonchain architecture document.

To learn more about the implementation, read the Dragonchain core documentation architecture section.